What books should every strategist read?

I often get asked for recommendations of books to read from people people who’ve just taken up client-side marketing jobs, people who find themselves interested in strategy and planning roles at agencies, or people who are just interested in the general world of business, brands, and strategy.

Here is an unashamedly biased list of twelve books that I’d class as essential reading for anyone in those fields. They’re books on business; on knowledge, learning, and certainty; on sustainability; on marketing; and on some of the other things that we strategists often find ourselves grappling with. They’re books that have shaped the way I do my job and the way I see the world for the better, and you might like them too. 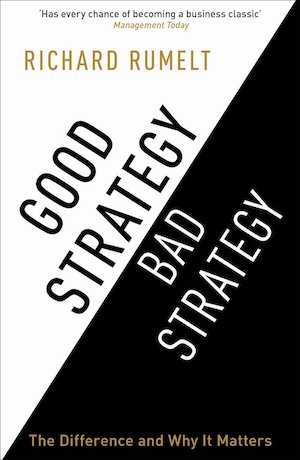 To Rumelt, a good strategy has three things:

It’s not just definitional: Rumelt goes on to suggest various patterns of thought and mental models that help evolve good strategies rather than bad ones, and how to continually search for competitive advantage. The result is a high readable and highly practical guide to strategy in a broad sense. If you can hold yourself and your work to Rumelt’s standards of “Good Strategy”, you’ll be doing better than most. 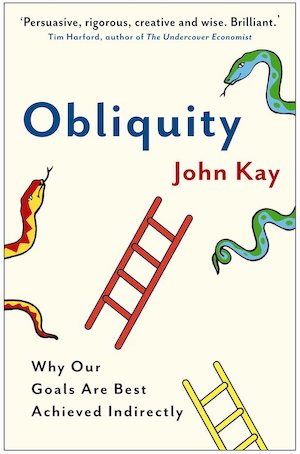 For me, a big part of doing strategy well is realising that you rarely get from “A” to “B” directly. That’s partly because you don’t know what that route looks like. But it’s also because, perhaps unintuitively, trying to go straight to your destination often sets you up for failure. The most profitable companies are not the ones that make profit their primary aim; the happiest people are not the ones who spend all their time trying to be optimise their happiness.

Kay, an economist, is particularly scathing when it comes to businesses that prioritise commercial success above all else; they tend to fail both in commercial and non-commercial terms, because the goal of profit can’t be arrived at directly. Focusing on profit too directly means taking your eye off the ball when it comes to your core business, and creates perverse and distorting incentives that are doomed to fail.

Obliquity helps you to develop an oblique mindset, something that’s unintuitive and easier said than done but that’s essential for good strategy. 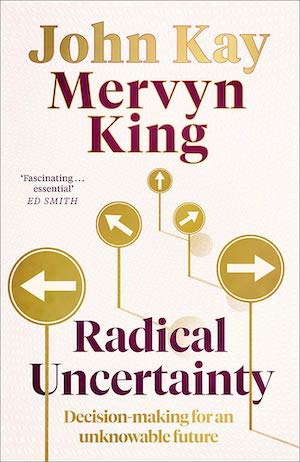 Expanding on Obliquity, John Kay wrote this book with the former Governor of the Bank of England, Mervyn King. In it, the two esteemed economists strike back at a world that measures more and more but understands less and less.

This attitude is a particularly healthy one to develop in the advertising and marketing industry, where snake oil salesmen lie around every corner offering false certainty, fake measurements, and inaccurate predictions. The reality of what we do is that it’s far more a puzzle than a mystery; human beings are complex, human society is more complex still, and the impact of the communications we put out into the world cannot be predicted. Embracing that – and finding ways to adapt to it – is an important step.

(Creating brands, developing distinctive identities for them, marketing and growing them) 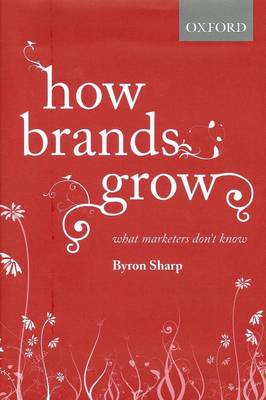 Byron Sharp’s classic 2010 book revitalised marketing, helping to inject a huge dose of evidence-based realism into what can at times be a fairly hocus-pocus field. Sharp set out clear evidence and a strong argument for several dynamics of brand growth that had previously been controversial or unknown.

Discoveries like the “double jeopardy law” – that brands who have lower penetration tend also to have lower loyalty – and Sharp’s encouragement to “focus on light buyers” changed the way that marketeers look at brands, prompting a shift away from trying to drive loyalty to pursuing penetration instead.

There have been two unfortunate consequences of How Brands Grow’s dominance of the conversation. First, Sharp’s pugnacious style and habit of framing all his discoveries as immutable, scientific laws means that he’s become hard to criticise, as Mark Ritson has pointed out. And second, many more people talk about the book than have read it from cover to cover, and so it’s frequently misrepresented (“Byron Sharp says loyalty doesn’t exist!”) or used to support arguments it never actually makes.

Nevertheless, it’s a landmark book that stands up remarkably well a decade after its publishing, and should be absolutely essential reading for anyone who finds themselves working with or responsible for a branded business. 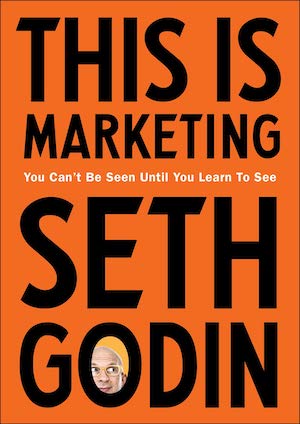 Seth Godin is in some ways the spiritual opposite of Byron Sharp. While Sharp hunts for immutable laws, comes to data-led conclusions, and favours marketing that wrings out every last drop of effectiveness, Godin is all about intuition, gut feel, empathy, and creating marketing that doesn’t feel like marketing.

Godin has spent much of his career talking about “tribes”, which seems appropriate: he and Sharp represent two of the largest – and most opposed – tribes within branding, marketing and advertising. Godin’s tribe favours growing brands without advertising, building an organic and fanatical audience, using permission-based direct marketing channels to reach that audience, and fostering loyalty with them. Sharp’s tribe favours speaking to as many people as possible, using mass communications channels to reach that audience, and trying to encourage light buyers to buy just a little more often.

These opposing camps each have much to offer, are appropriate in different situations, and are worth understanding in-depth even if you find yourself firmly aligned with one camp or other other: it’s important to understand perspectives different to your own. 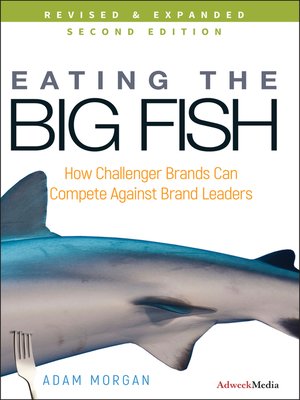 If Seth Godin and Byron Sharp are spiritual opposites, perhaps Adam Morgan is more of a comfortable middle-ground between them: respectful of the evidence, but also unwilling to look at brands as though they were all the same, and unwilling to accept the idea that the most successful brands are the biggest. In Eating the Big Fish, Morgan focused on outliers: small brands that punched above their weight and that made a virtue of not being the category leaders. In the process he coined the term “challenger brands” and changed the way marketeers looked at category leaders.

Eating the Big Fish is a playbook for challengers, setting out ways to steal an unfair share of attention and outmanoeuvre your larger competitors. It’s an essential read whether you are a challenger or find yourself challenged by one. 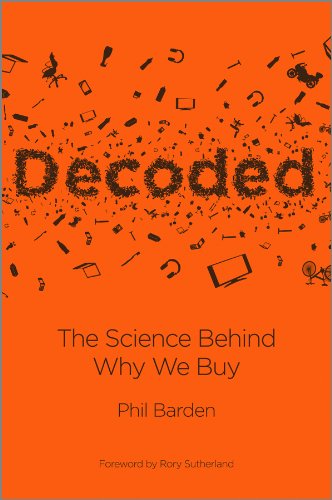 The advent of behavioural economics changed marketing hugely. Pioneering psychologists like Amos Tversky and Daniel Kahneman showed that human beings – far from being perfectly rational, self-interested creatures – were fallible in countless ways, subject to cognitive biases and easily fooled. That’s especially true when our brains are running on “autopilot”, as they often are.

Phil Barden’s book Decoded is perhaps the best attempt to apply that sort of thinking to marketing, and specifically the question of why people buy the things that they do – how they remember brands, how they conduct comparisons, how they make decisions. It’s a solid generalist’s grounding in decision science, and a good leaping-off point for further reading.

(How to come up with new ideas, how creative organisations work)

A Technique for Producing Ideas 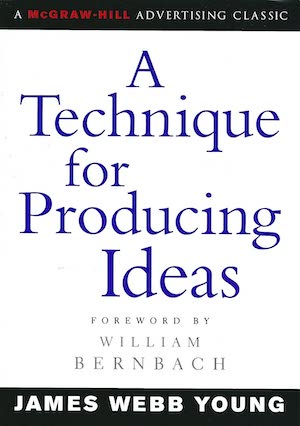 A Technique for Producing Ideas

Don’t let the length of this one fool you: it’s a classic, and for good reason. Advertising man James Webb Young wrote A Technique for Producing Ideas in 1965 and it remains as relevant now as it was then.

Young believes that creativity is mostly about taking old elements and combining them in a novel way; it’s not about inventing something truly original. He then outlines a method of going through life in a way that maximises the amount of information you’re exposed to, that increases your chances of remembering it, that helps you combine that material in new and interesting ways, and that allows your subconscious to do the essential work. 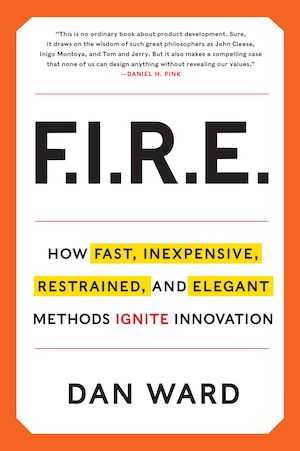 Dan Ward worked in procurement for the US Air Force, so he knows waste and inefficiency when he sees it. The norm in that world is billions of dollars of budget over-runs years and deadlines missed by years rather than months.

Ward suggests a different path. Rather than “cheap, fast, good – pick two” – the so-called “iron triangle” – Ward insists that we must have all three. Things that are fast are liable to be cheap, because time is money; and they’re also liable to be good, because they’re more likely to be simple and uncomplicated.

Ward steps through the process of innovation and creativity, and of getting a new idea into the real world, in a way that’s Fast, Inexpensive, Restrained, and Elegant – the “FIRE” of the title – and it’s just as relevant to knowledge work as it is to designing a new fighter plane. 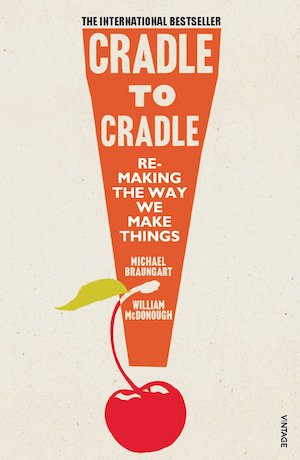 Our consumerist society is built on a destructive cycle: the extractive economy consumes finite natural resources, constructs them into materials for sale, uses them for a short period, and then disposes of them. This “produce, use, waste”, “cradle-to-grave” cycle depletes natural resources and is unsustainable as the global population rises.

In this seminal book, the chemist Michael Braungart and the architect William McDonough offer up an entirely different way of doing things: A zero-waste, renewable-energy—powered economy that is truly circular and regenerative. Nothing is wasted, all outputs become inputs; materials go from “cradle to cradle”. Cradle to Cradle is a manifesto for a better world and a how-to guide for how to get there; it’s essential reading for anyone working in a business that manufactures products. 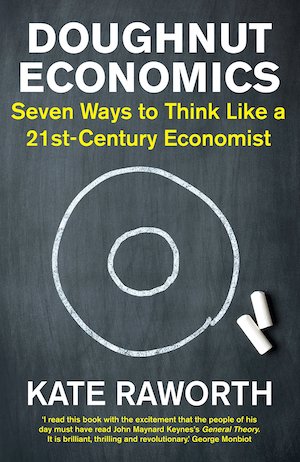 When discussing the future economy and the problems that humanity face, it’s common to find people sorting themselves into one of two tribes. The “de-growth” group look at the rate at which we’re consuming natural resources, and particularly the way that those in the developed world consume more per head than those in the developing world, and see no future for economic growth; they think we must find ways to shrink the economy if the planet is to remain habitable. And the “raising living standards” group look at the way that much of the world still lives in grinding poverty, dying early from preventable disease and working in unimaginably poor conditions; they think that we must find ways to raise the quality of life for billions.

At first blush, the two groups seem at loggerheads; surely these two priorities are in contradiction with one another? If we raise the living standards of the whole world, won’t they then consume resources like Americans and Europeans currently do, plunging the world into a climate catastrophe? And if we shrink the economy, won’t hundreds of millions of people’s lives get worse or even end?

Kate Raworth threads a brilliant path through the middle of this debate, outlining a way of thinking about the economy that achieves both aims. She suggests an economy that looks like a doughnut: it has a living standards floor below which it should never sink, and an environmental ceiling above which it should never rise. If humanity can find a way to live between those constraints, Raworth suggests, we can have our cake – or doughnut – and eat it too. 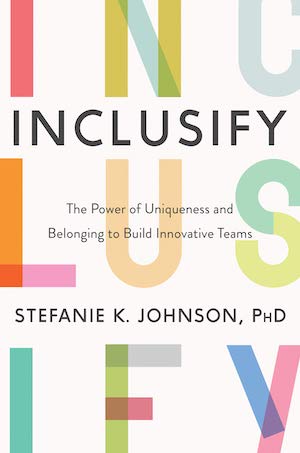 While more a management book than a strategy book, Stefanie Johnson’s Inclusify is an important addition for two reasons.

First, it’s a great guide to dismantling unconscious bias, an essential skill for the strategist who must, more than anything else, empathise with people very different to themselves. The world of advertising and marketing is historically not very good at doing that.

Second, it’s a useful guide on a) navigating biased workplaces as a member of an under-represented group and b) becoming an ally for under-represented people. In an industry as lacking in diversity as marketing, those skills are sorely needed.